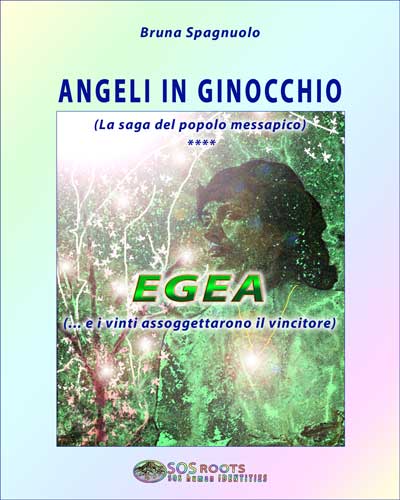 Egea is the novel in which the serial pulls the oars in the boat, brings to fruition all the dowels set up during the long literary journey of the entire saga. Everything finds its conclusion, in this last section, and even the linguistic relationships of characters and places see the signs that have appeared here and there blossom and flourish, as if by chance. Little Egea, daughter of Eliade and Cheones, inherits the throne at an early age and immediately shows that she has the innate scepter that does not come from man. Everything about her is extraordinary, from the beauty to the hardworking and faithful humility with which she mixes with her people and makes their vestiges great. Secret is the identity of the one who will win her heart. Difficult are the tests with which he will astonish people near and far. Phantasmagoric scenographies, tensions and great risks are the setting for the limitless enterprises of Egea, this female character who has no equal in known time. There are countless choirs that immortalize her multiple genius and unequal grandeur, both haughty and humble at the same time. Wonders never seen by the human eye, grandiose and unspeakable things happen around Egea, whose admirable and regal abilities stabilize the uncertain balance between populations accustomed to transforming the handshake into a challenge to the last blood. The great queen of undisputed prestige and blinding charm, who unites belligerent populations under the same scepter, conquers the reader and insinuates an uncontrollable and ambiguous rogue anxiety into his heart. What is it that from the greatness of the character throws that certain annoying discomfort to the reader? Where does originate the sneaky perception that, at a certain point in the novel, begins to take shape? What creeping pitfalls are looming in Egea’s life and make the goosebumps and anxiety pass from her heart to the reader? What are the unequal conflicts that Egea keeps in perfect balance in three realms? What is the conflict that requires grazing light and incorruptible courage and that takes place inside her heart? Shall she finally triumph, refulgent like an undisputed dawn, this heroin whose aura of mystery envelops her kingdoms, their valleys, the swarming of all their creatures and even their sky? What shall give even the wind an horizon-sized shiver and freeze life in an awaited present merged with a past that fades into the future? There are many emotions that await the reader and many mysteries that he will have to unravel.