The joy of marriage vanished and the uncertainty
and anguish erased even the memory of it. A time of waiting, deprivation and
pain began For Angela… 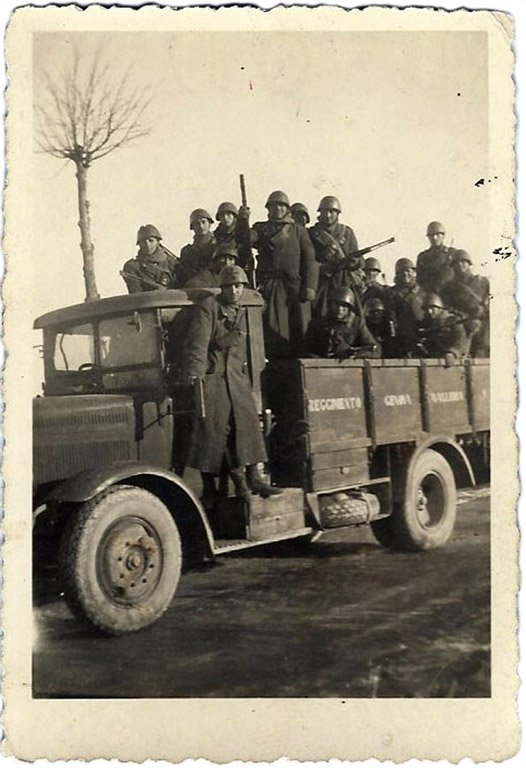 From the book *Angela (the heirs of the Messapians):

«Like small specks of dust, in the universe of catastrophic events that shook the world, Angela and Gaetano were completely lost from sight. She regretted the time when it was enough for her to write on the envelope “Dragone Borbone Gaetano, quarto battaglione, posta militare, Roma” and post her letters for him to receive. “I will always love you,” he had told her as he walked away from her. She used to soothe her despair by recalling those words to her memory over and over, when the news she stole from la gente buona, that is “those who mattered”in town, used to tear at her heart.»

And… there came a time when the conflict erupted like an unstoppable fire, closing Angela and her world out of this world, in eternal waits with no more glimmers.

It was the postwar period that, with makeshift photographs, gave documentary consistency to the occasional stories of the survivors. The underlying ones were what Angela found of the war in Gaetano’s suitcase.

In the Balkan campaign Gaetano was awarded a War Cross for the campaign of Albania, one for that of Greece and one for that of Yugoslavia, three WAR CROSSES, which he never exhibited in his life and kept for decades, until, from the desk of his office in the Municipality, someone stole them to show them eventually and obtain the emoluments that Gaetano had never requested. He was like this: an energy generator and a pole of human brotherhood, an idealist and a dreamer who did not attach much value to material goods. At the time of his military discharge, in the name of his motherland, he was given a check with no expiry date, to be paid on sight, issued on 2 December 1944, in Turin, by the Bank of America and of Italy, for an amount of L. 500. That sum, with which the total upheaval of life, suffering and the daily risk of death was rewarded, was worth a quarter of the average salaries of that time which, in the large cities of Northern Italy, were around L.2000, and even a fifth or less of the wages of skilled metropolitan workers. However, Gaetano could have accomplished something important with that money, because in the South, instead, it was worth a fortune, but… he received the check as an acknowledgment, folded it with respect, put it in his wallet and kept it in his breast pocket, on his heart, his whole life long, like a piece of that flag he had served without asking or expecting anything in return.

There it was found by his daughter, who framed it and hung it on the wall of her library, when a sudden stroke cut the life of Gaetano at the age of sixty-eight.

Handing the photos to others and exchanging them with multiple comrades meant increasing the chances that the family would receive news from the front and also represented a sort of superstition that resembled an unconscious life insurance or at least the memory that one wanted to leave of oneself. The photos given to Gaetano all remained in his suitcase. Taken into the gear of war, he passed from the Balkans to France, experienced the general collapse of the army left in disarray between occupied enemies and occupying allies who had become enemies.

He saved himself, his horse, his fellow soldiers and reached the national borders, to settle on the front of the homeland to serve. He never delivered the photographs that had been entrusted to him and he himself was unable to communicate with his family; until 1945 he lived in a sort of limbo in which every hour of survival was the only present to live without expecting a future.

On the back Gaetano wrote only “France”, his name and added “and companions”.

Gaetano fled from France on horseback, with his fellow soldiers. Ragged, exhausted and hungry, in Giaveno -Piedmont- they were helped and clothed by the community, then they became part of the painful metamorphosis with which Italy passed from the war of aggression to the war of liberation, through the national liberation committee similar to a single body by the limbs scattered on the homeland. Hunted by the Germans and forced into the bush, they acted at night and hid during the day. Families sent, at great risk to their lives, women to carry out tasks outside the town, with the leftovers of their families’ meals hidden in baskets. They welcomed that fortuitous and irregular food as the true hand of Divine Providence and, often, did not even have time to eat it, to escape the merciless hunting of the Germans. They frantically hid it in saddlebags or wherever they could fit it. Those who survived ate it at night, blindly, in the darkness of the meanders in which they hid, and often, as Gaetano was to tell when the war was over, along with the food they also ate some plant bugs or other insects that ended up inside it; when they had nothing else, in order not to die of hunger, they ate the very hard beechnuts of the leafy beech woods. The story of the period that Gaetano spent in Piedmont has adventurous pages and chilling aspects that Angela only discovered when everything was over. From the book “* Angela (The heirs of the Messapi)”: «I have seen young people die in the prime of life. I saw the asphalt tinged with the blood of my teammates, when we used to come down the mountain and hit the Germans before disappearing into the scrub again. I’ve seen my friends riddled like bloody flesh. I’ve seen young people jump to shreds, with bombs and grenades. I’ve lived through times when life wasn’t even worth a dressed cane. But what really marked me and that comes back in my nightmares is something that the human being, as such, should not be able to conceive. I have always known that wars are ugly and that you die in war, but I have always thought that dying for the homeland must be a highly dignified heroic act. Discovering that some human beings can even use inventiveness to give death to other human beings in an atrocious and frightening way has turned off something inside me. I was afraid of dying throughout the war, but, in Piedmont, I had to deal with another type of fear, a subtle fear that resembled the urge to throw up. Acts of heroism are, in general, acts of courage, this is what everyone thinks; for me, acts of heroism were all times when I had to expose myself to the danger of dying horribly. You see, having courage means not being afraid of dying or, rather, ignoring the fear of dying and accepting the idea of death, but the idea of death in war has to do with the duty towards the homeland and towards all that the homeland contains. This falls within the rules and laws of war itself.

Soldiers from opposing sides face each other, kill the enemy in battle or hold him prisoner when they capture him. This is what you know when you go to war, so you think that the enemy is someone like you and that the worst thing he may do to you is shoot you. Finding out that he can do unspeakably atrocious things and that he can even enjoy doing them is something that changes you inside forever. I have always done my duty without hating the enemy, but / … / ».

I close this insight with the image that should have started it. Gaetano is the first at the bottom right. This photo was taken before June 10, 1940, in Rome, where the dragoons led a pleasant life, between service and free exit, still unaware of what would happen. It was the time when Gaetano was not yet married and he refused to think that Italy would enter the war or perhaps, just thinking about the war, he adjusted his life to “who happy wants to be so be he, of tomorrow there’s no certainty”.

When the discharge from war finally arrived, the soldiers who were preparing to return “home” were no longer the people who had left nor did they know what would be awaiting them there.

The war was over … The rediscovered peace had to hover for a long time before it could open a passage among the world’s populations surrounded by ruins, afflicted by misery, pierced by pain for the fallen and destabilized by the unknown fate of the missing. The “liberated” world wrapped itself in the skies of the shattered known realities. The masses and individuals had to deal with the known and unknown shadows that the passage of the war had left inside and outside them. Angela and Gaetano were no exception…