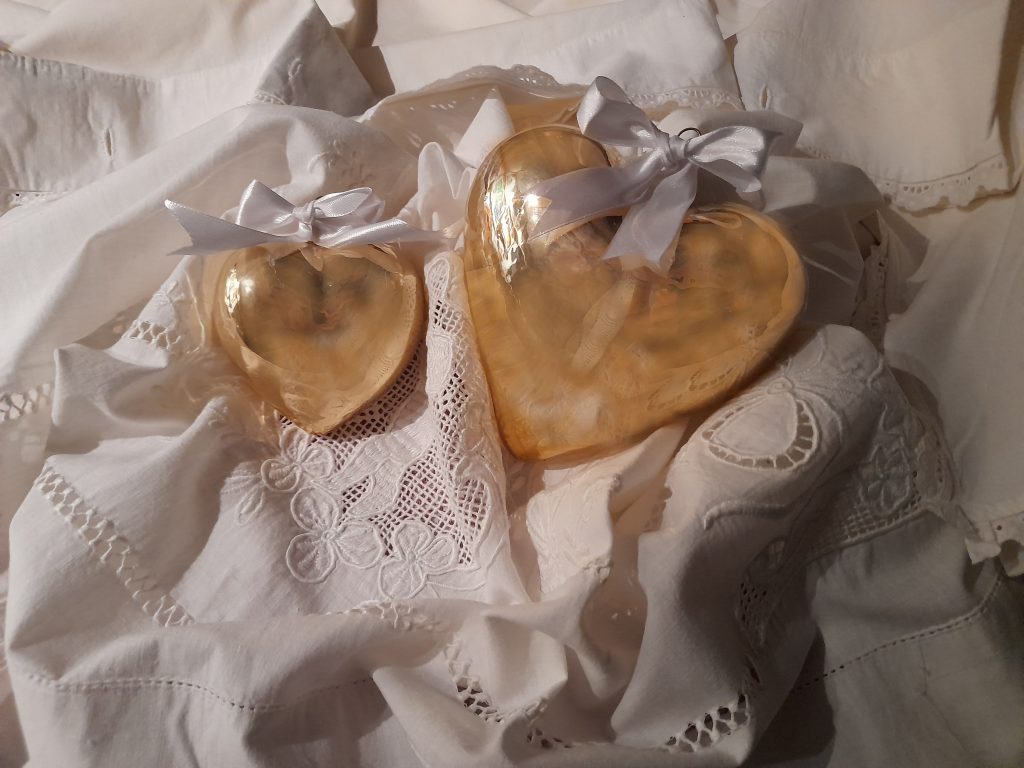 In the nuptial ritual of the communities clinging to the Lucanian slopes of Mount Pollino, the nuptial bed played a very important role. From the book Angeli in ginocchio (La saga del popolo messapico)- *Angela (Gli eredi dei Messapi) – Kneeling Angels (The saga of the Messapian people) – * Angela (The heirs of the Messapians): “On the day” of the cloths “, pots and pans of tinned copper were hung on the focagna (the kitchen)’s wall rack, the dishes were placed in the new cabinet, which Giovanni had had Giuseppe Lequerce make and which still smelled of sap, and the trunks were placed in the room on the upper floor.

Two splendid wrought iron andirons (trastiellI for dialect jargon) and some beautiful new boards for the bed were brought. While the women arranged the boards on the andirons and placed on them the bed size big sack, made of broom cloth, with fragrant and rustling cob wraps padding, to support the white and soft woolen mattresses, they exchanged a glance and / … // Lucrezia walked away, to fetch the rest of the linen, and the women began to gossip again, commenting that the beautiful Angela, naked in that princely bed, with her beautiful loose mane, would be so beautiful that the groom would pass out /… //. An admiring murmur followed mother Lucrezia’s words. The prolonged exclamations were dispelled with an impatient gesture by Lucrezia, who gazed at the wedding bed satisfied with it. One of the women said: – With the embroidered fold of this sheet turned over and these perforated pillows edged with fine filè, the shiny blue of the quilt is almost blinding. I wouldn’t put the bedspread on it, though one of the seven beauties itself. – / – The bedspread will be put on the wedding day, when we will sprinkle it with sugared almonds and coins.»

Angela’s bed photographed here was set up with the original linen of her wedding but in the present historical time and on current mattresses and bed bases and not on the boards, which in 1941 rested on high iron andirons. The height of the period bed was (as opposed to the height of modern beds) a valuable display, which allowed the embroidered side part of the fold of the sheet to fall in full view and the beautiful elaborate fringe of the bedspread to frame the bed with a princely touch. 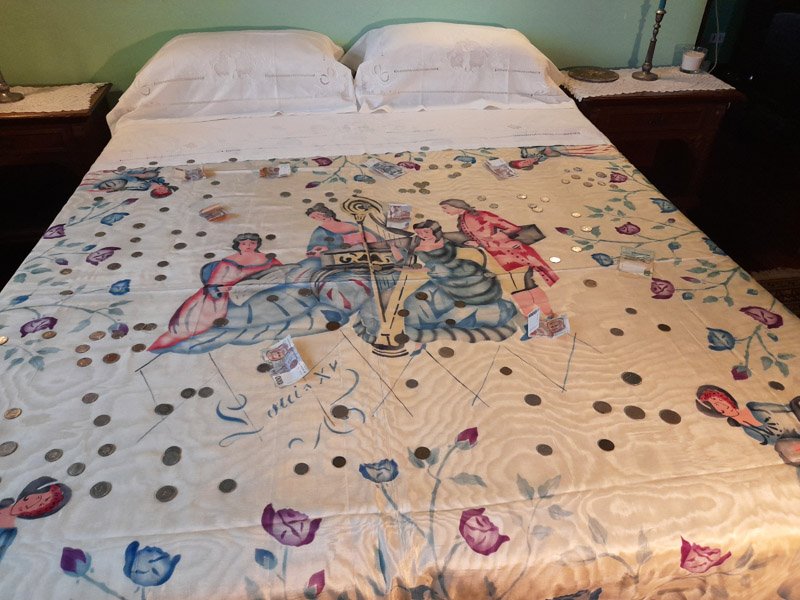 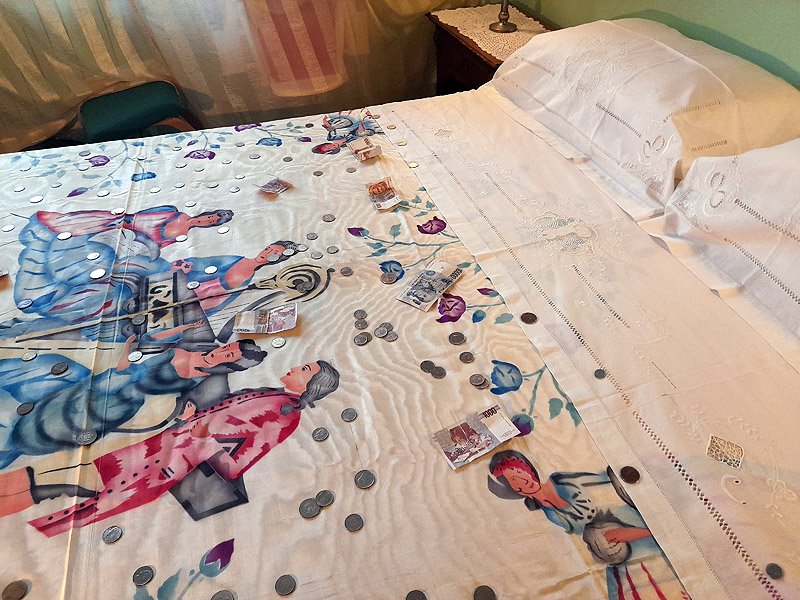 The coins that Angela’s wedding bed showed off on Holy Saturday of 1941, the day of her wedding, as well as the handfuls of light coins that were thrown, together with the tiny cylindrical sugared almonds with a cinnamon soul and wheat, when the bride and groom left the church, were the currency of the time. The coins that S.O.S.ROOTS scatters on her wedding bed set up in 2021 have different world origins and “ages”. This has various meanings that eventually converge into a single meaning. 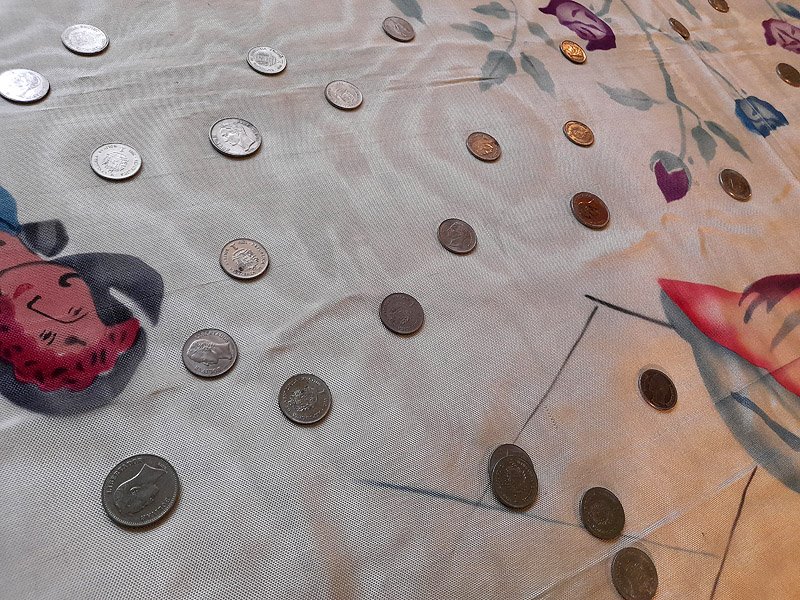 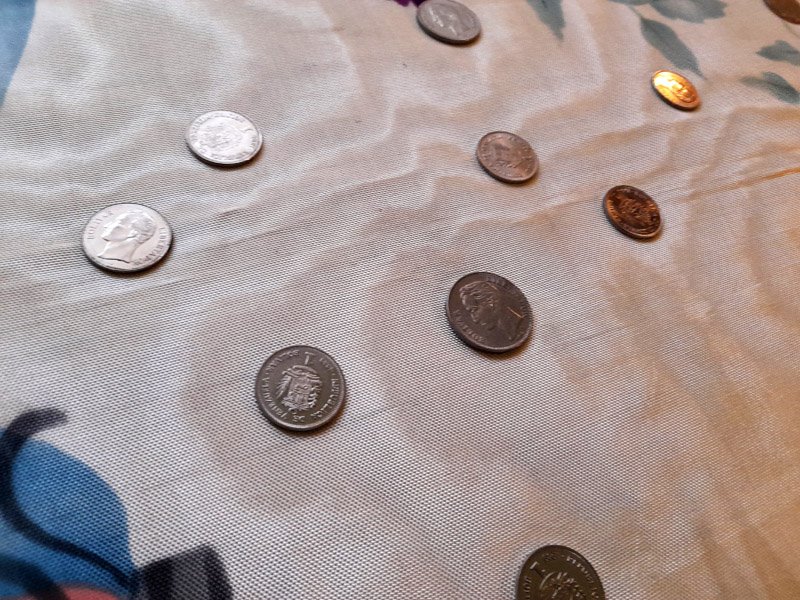 The origins are different as well as the world races and their ethnic groups. They all “meet” on the wedding bed of an unknown peasant girl (who was unaware of the existence of their peoples in turn unaware of the remote corner of the far south of Italy where Angela lived) and unite the history of their peoples and their girls, with all the related epics and with all the values that inspired their life, to the story of Angela, of her world made up of sowing, harvests, reaping, threshing, tears, singing, and timeless values. 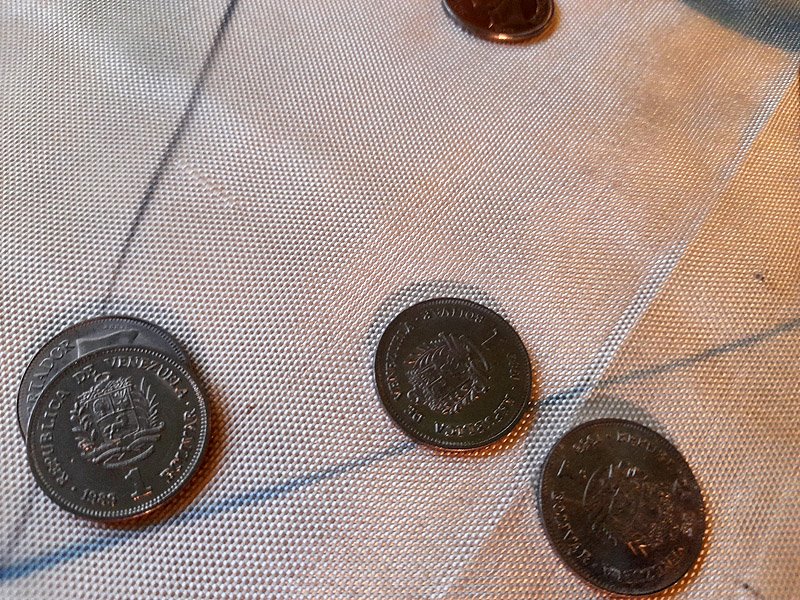 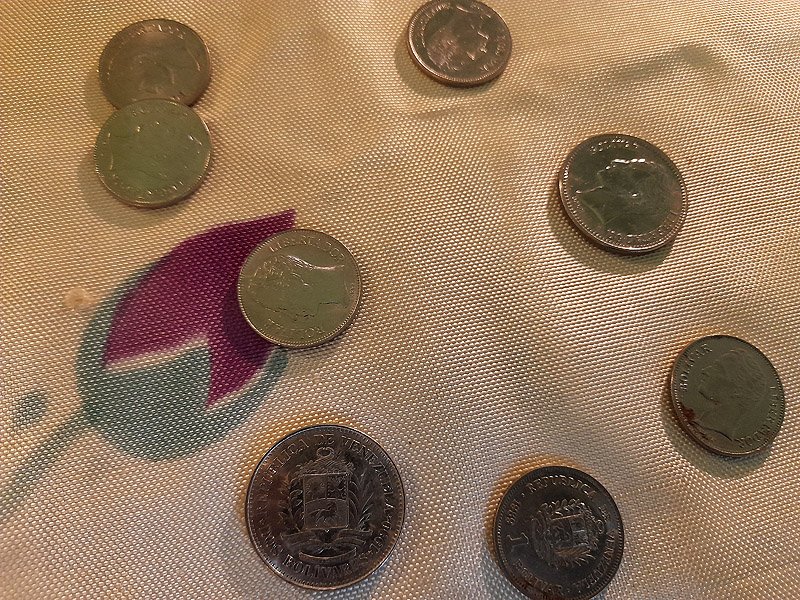 Different are the coins as different are the populations and the epochs to which they belonged, one is the bed on which they were scattered as one is the world that is home to the peoples and as one is the human race. One is the “girl”, whose wedding ceremony is commemorated here, and she is a legendary peasant from a past that must be stolen from oblivion so that does not carry away with it the bridges that are needed for the present to meet the future. Angela, who is the symbol of her world centered on self-denial, solidarity and the fear of God, becomes the symbol of all the brides of other times and other places represented by coins and, together with them, of the indispensable identities to be handed down and of the need to celebrate the undeniable brotherhood between the populations of the earth. 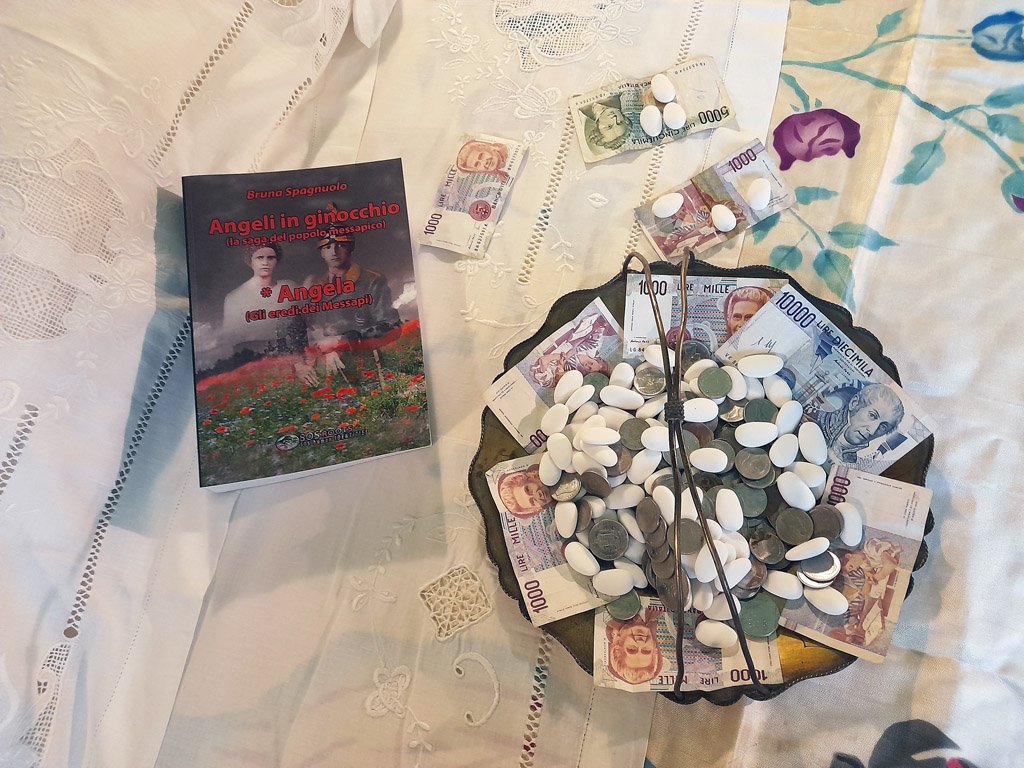 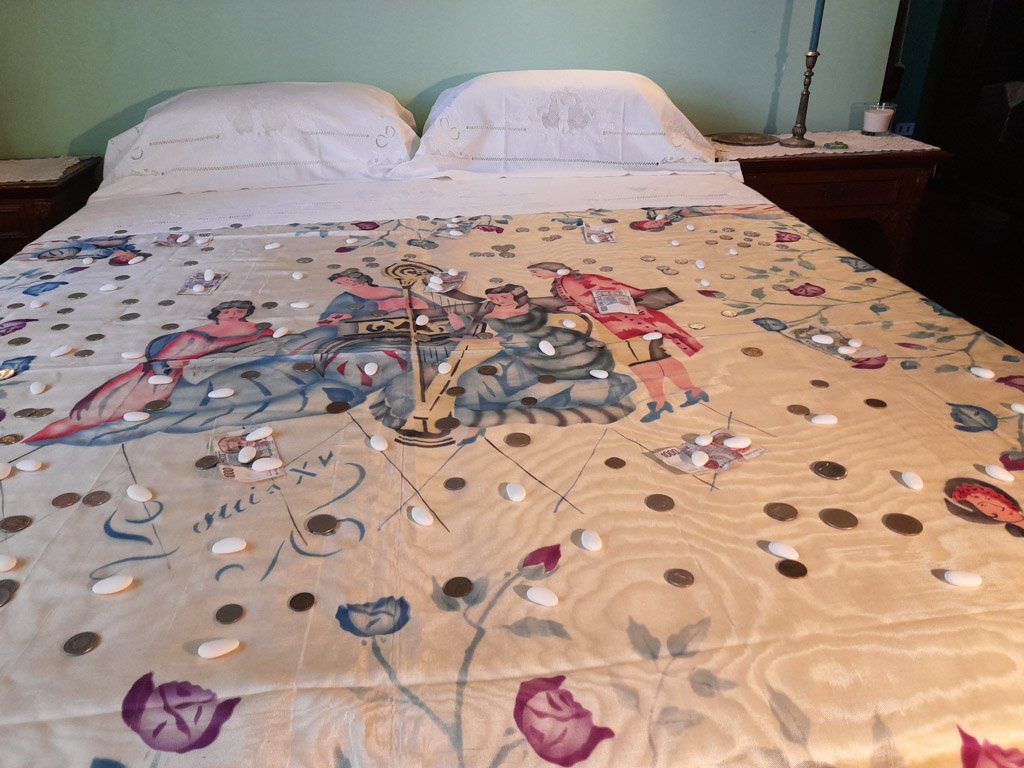 The last touch to the wedding bed was to scatter the sugar almonds (“confetti”) among the coins, to wish a life not only generous, but also kind and sweet with the two young people and with the new family they founded. 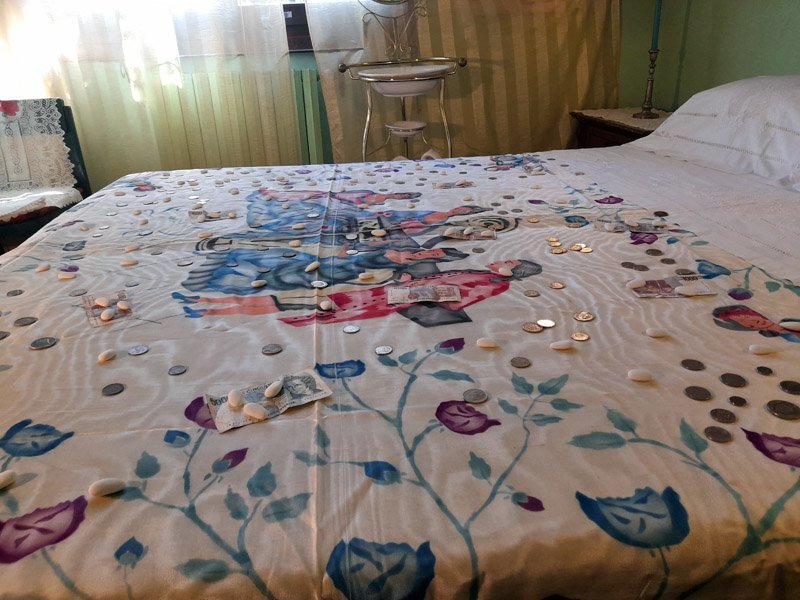 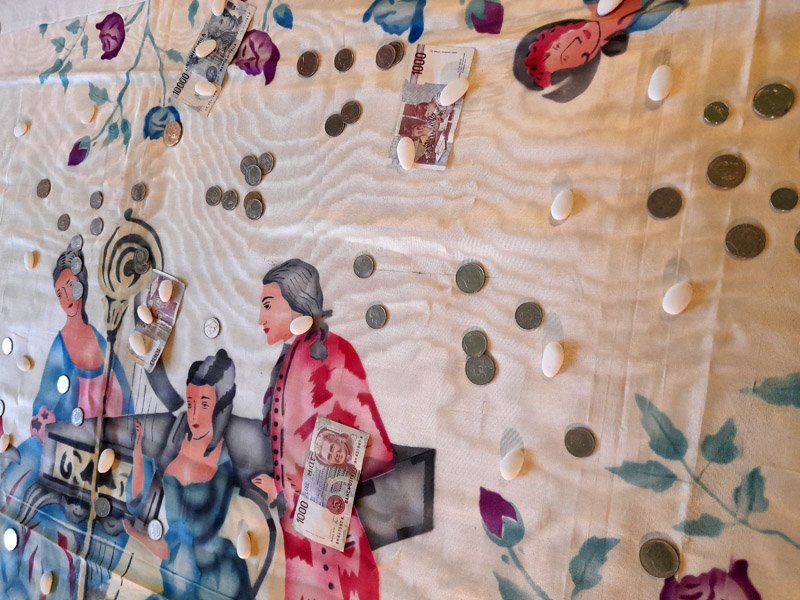 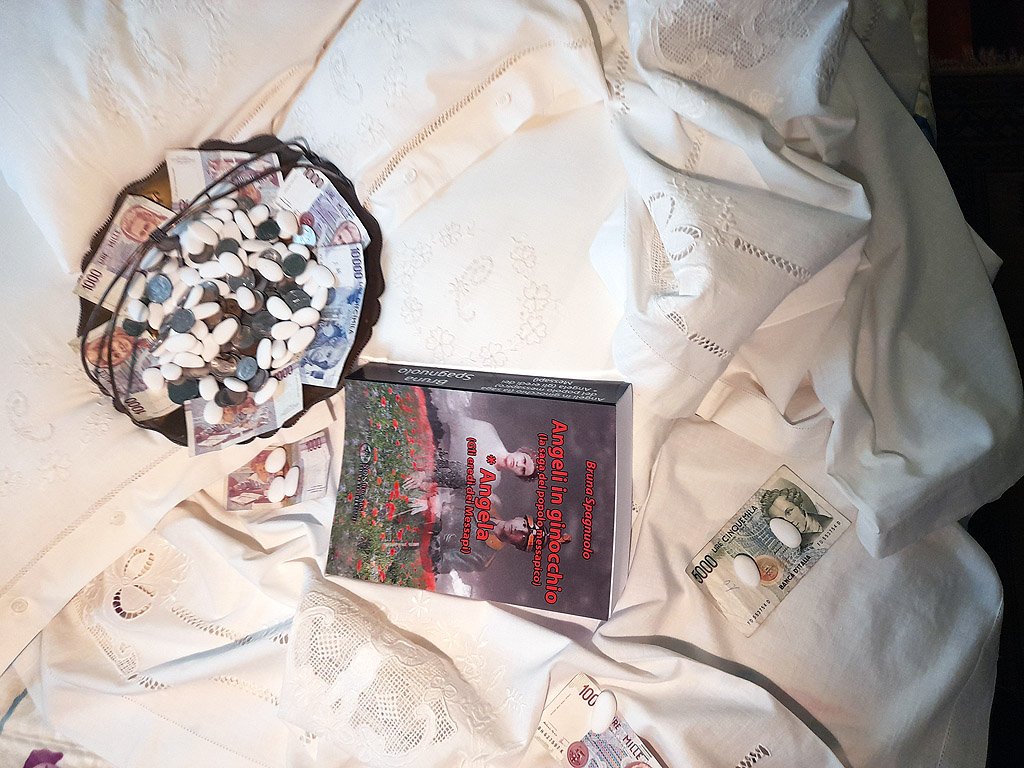