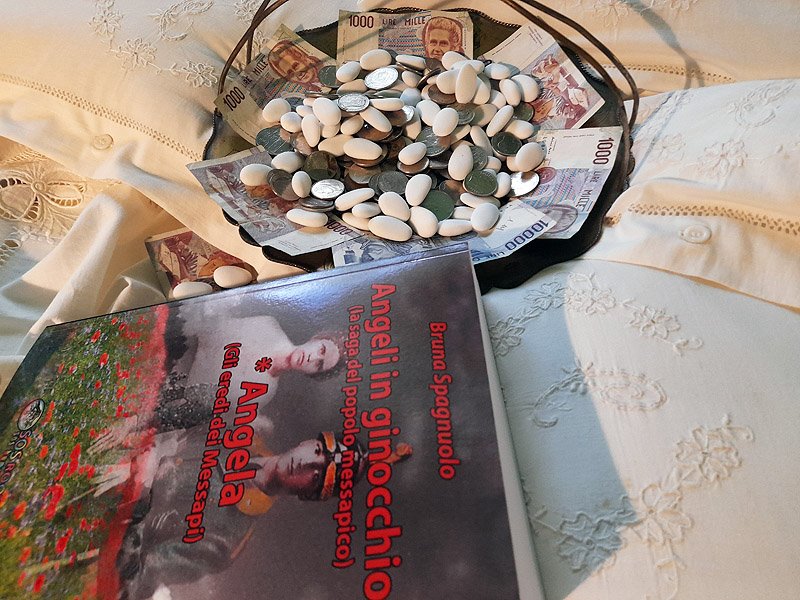 The young women of the past, who were not called “girls” but maidens, received a “dowry” from their parents, which could include land, money and the precious and indispensable “trousseau”.

Considering that the arable land was measured in “tomoli” and that the tomolo was worth more than two thousand square meters, only very few families had suitable economic conditions to “marry” the female daughter with several tomoli of land as a dowry and also add money and a good trousseau. Few girls, therefore, could receive a few blocks of land and money, and almost all of them received neither land nor money, because the family could not deprive themselves of any part of the little land that was barely enough to survive and had no savings. The trousseau was an important part of the famous “dowry”, it was almost always the only thing the brides of humble origins received and was the subject of prenuptial agreements, in which the groom’s family could ask, in the absence of land or money, at least an important trousseau.

The request could be for a trousseau “of four”, “six” or even “twelve”, which included, that is, four, six or twelve items of linen (including underwear for the groom). 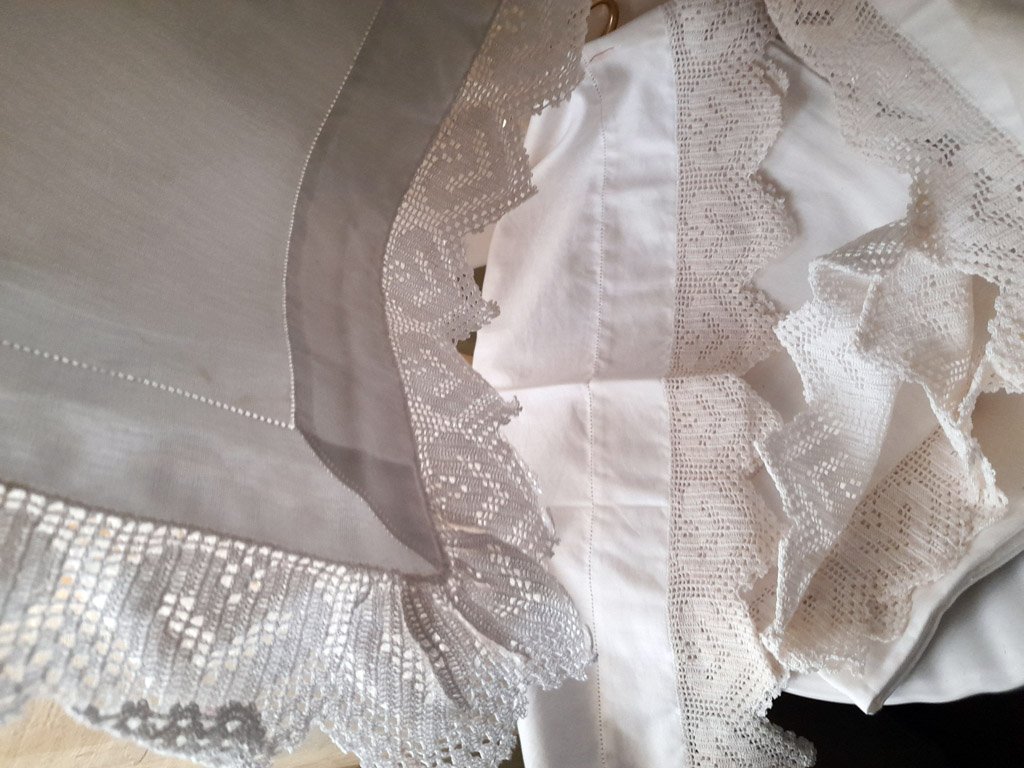 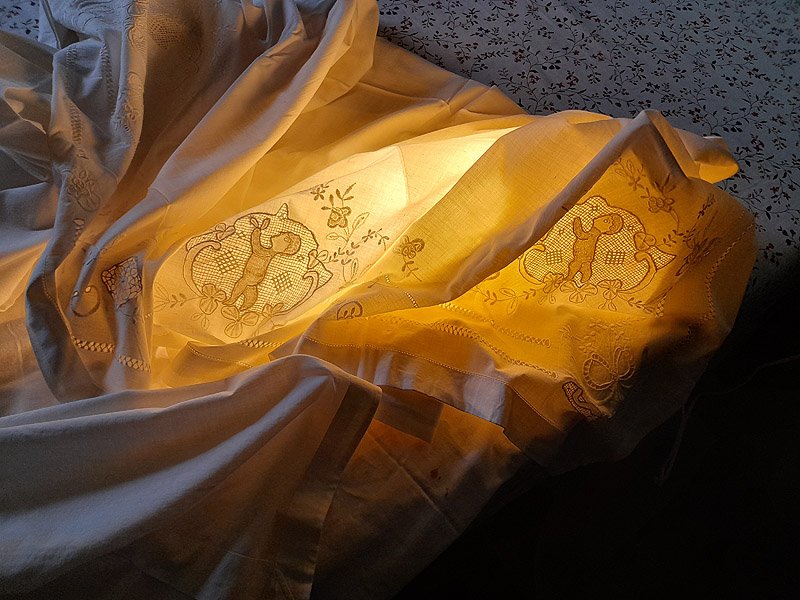 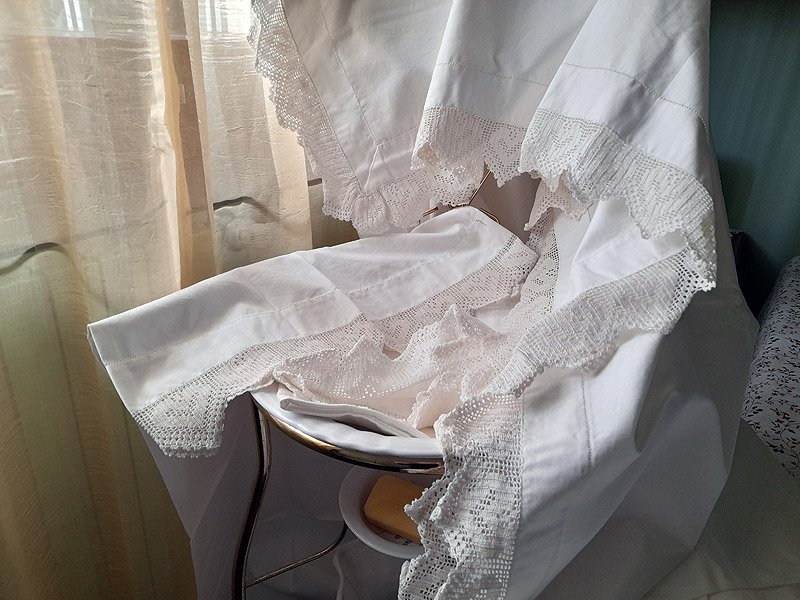 The trousseau, therefore, was the first thing mothers thought of, as soon as they gave birth to a daughter, inspired by the saying handed down from generation to generation: Daughter in sash, cloths in cash /the chest (for the dialect jargon:”figghya fiemmInI ‘n fascI, pannI’ nd’a cascI). 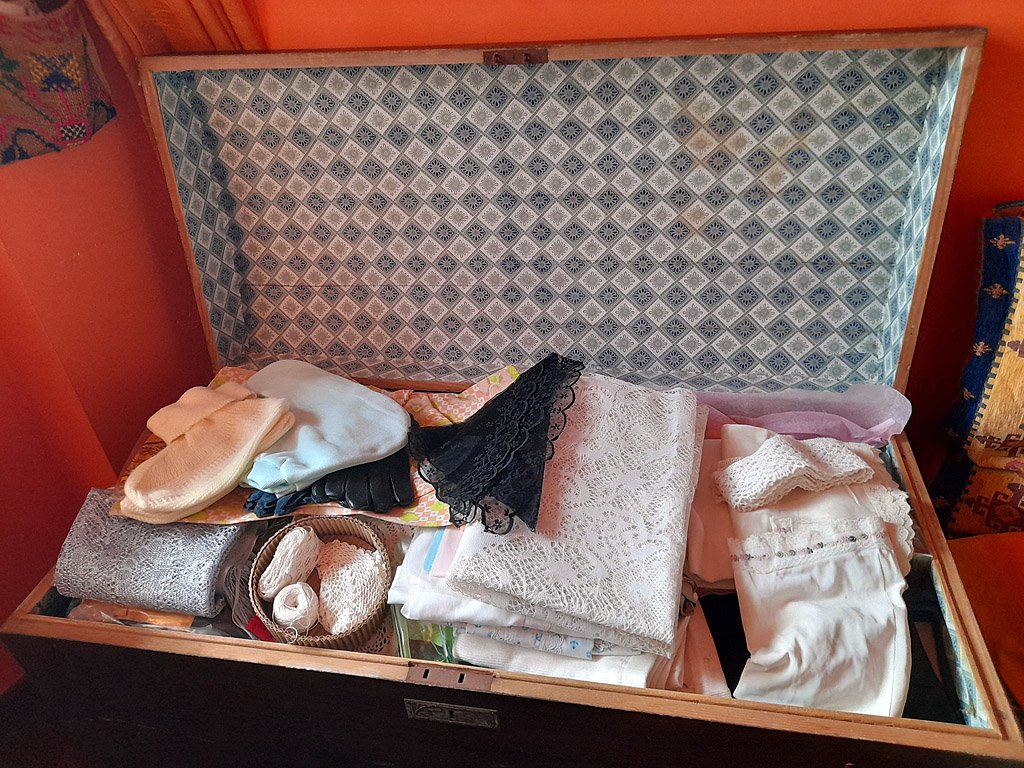 They began to save and put in the crate all kinds of linen that could be used for their daughter’s trousseau and for her future home, because they knew from experience that time would pass quickly and that at the right moment they would not have the economic strength to procure everything in one go. They used to assigne to the little girl, immediately, every piece of canvas that they could weave on their own, if they were able to, and every fabric (percale / poplin / linen / flannel / Flanders / linen) and fabric of all kinds and above all of cotton canvas robust and durable, for the sheets, when they had some savings to spend at the great annual fair and, a little at a time, they prepared them or had them prepared by the seamstresses for the linen that, growing up, the girl would embroider for her trousseau. The maidens had to grow up chaste and pure and without crickets in their heads (that is without strange ideas in their heads). They were to be industrious and hardworking, were to know how to look after the house, how to cook and how to work in the fields. The hardworking and also virtuous maidens, who even knew how to embroider, were rare.

Even rarer were those who managed to find, in the pasture, in the farmyard, on the donkey horseback or by the fire, before it got too dark, in the evening, the infinite spare time necessary for the wonders of the trousseau Of them it was said: “That girl has painted hands” (italian for the dialect jargon: quila guangnonI ghead’i meanI pindI). Angela, who was not only one of the girls with painted hands, but was good at peasant jobs like a man, took care of the house like the most virtuous women, knew how to cut and sew linen and women’s and men’s clothing, could knit sweaters and stockings, weave on the loom, darn in a refined way, embroider and do lace marvels and crocheting like an angel, was a legend. 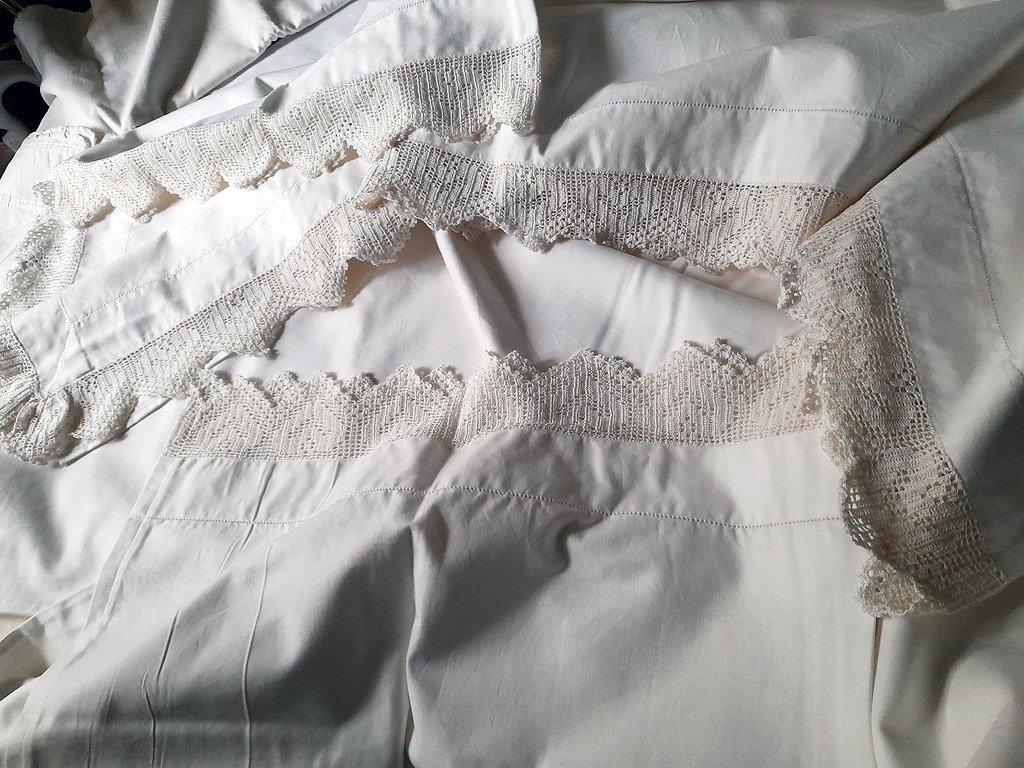 The dream of every bride was to have a new trunk, one of those lined and with a rounded lid, and to be able to keep in it the embroidered linen  to show everyone with pride. Memorable is the day when Angela can buy not one but two of those wonders (pages 272-273 of the book * Angela – (Gli eredi dei Messapi) / Amgela (The heirs of the Messapians). 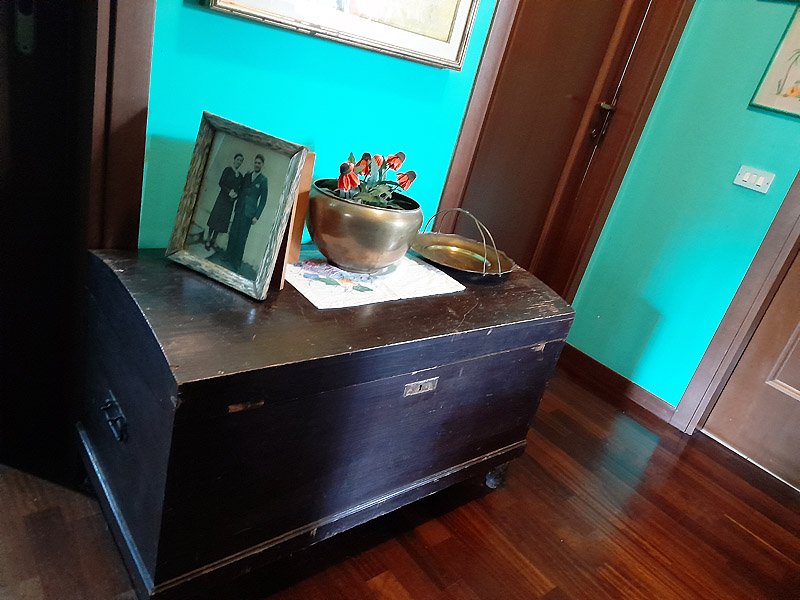 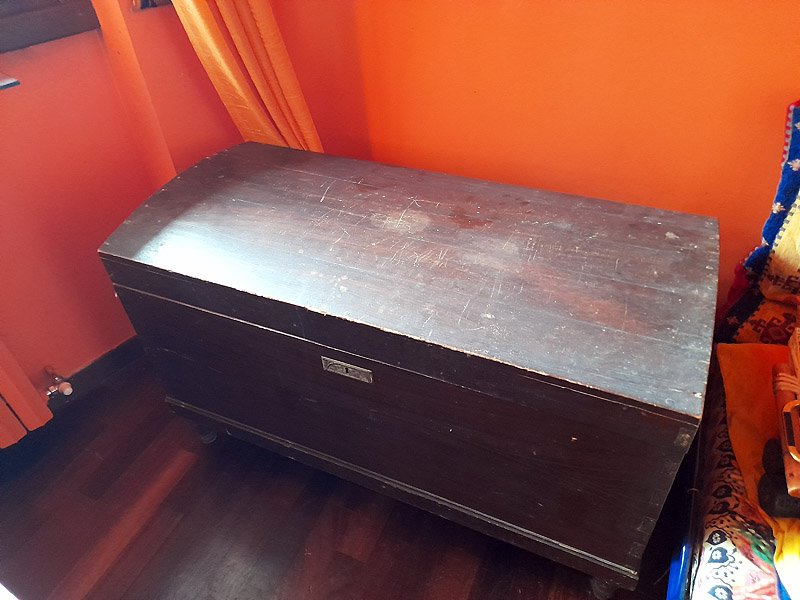 THE WONDERS OF ANGELA'S VIRTUES 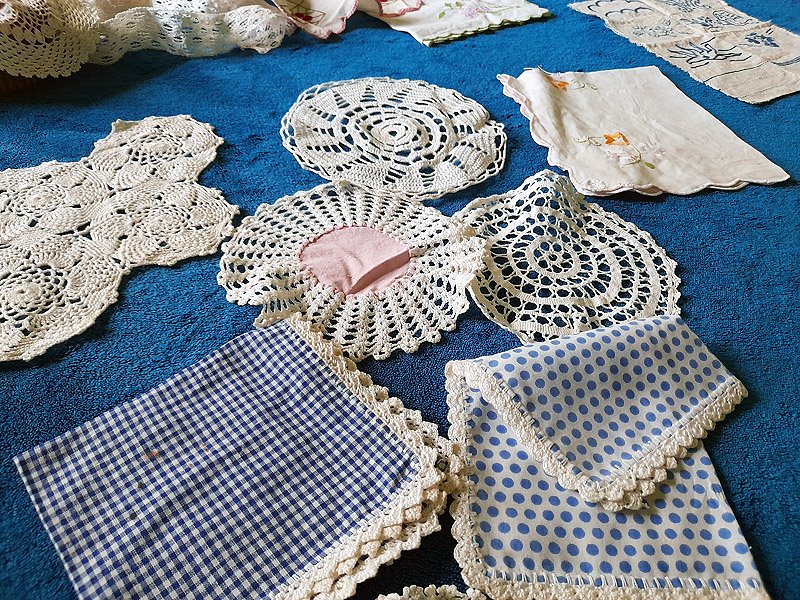 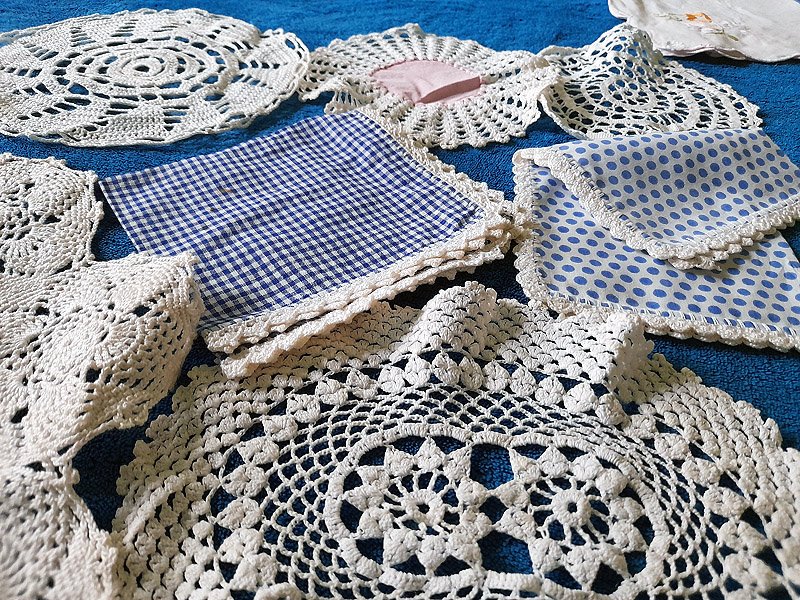 Doilies and lady handkerchiefs turned into precious things by Angela 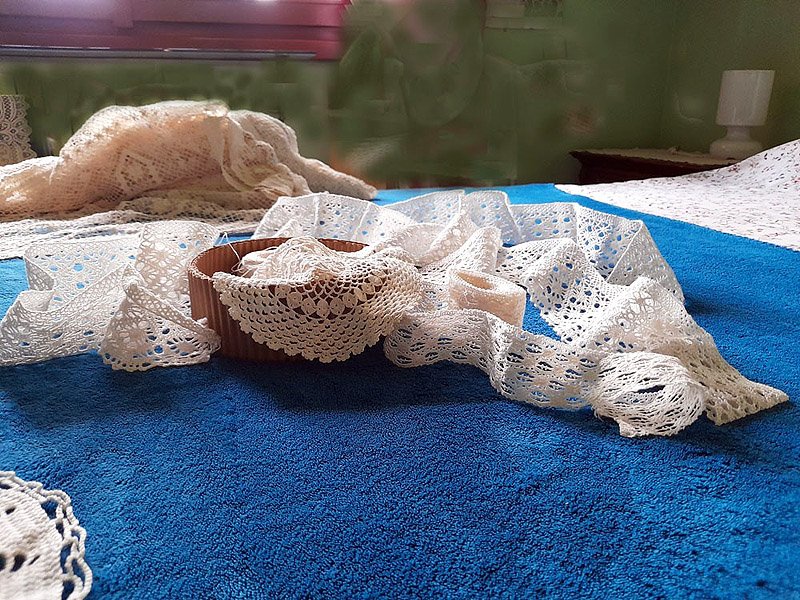 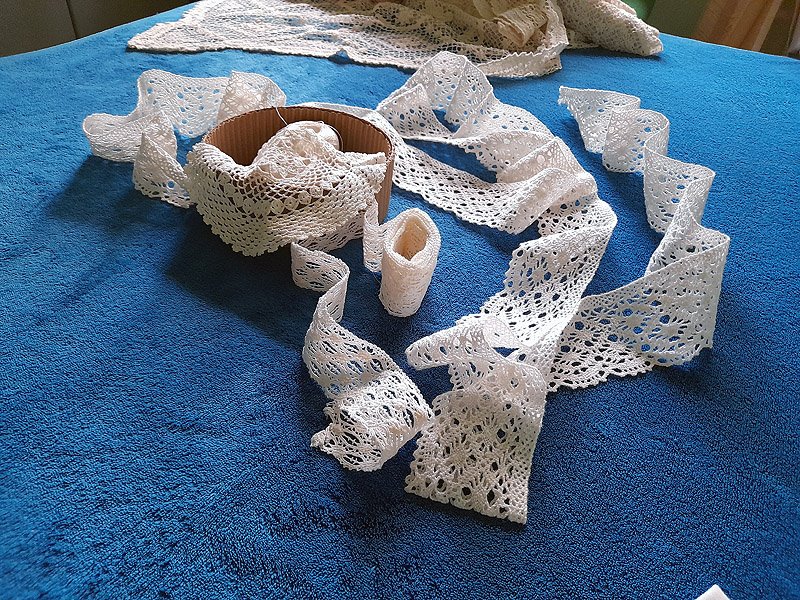 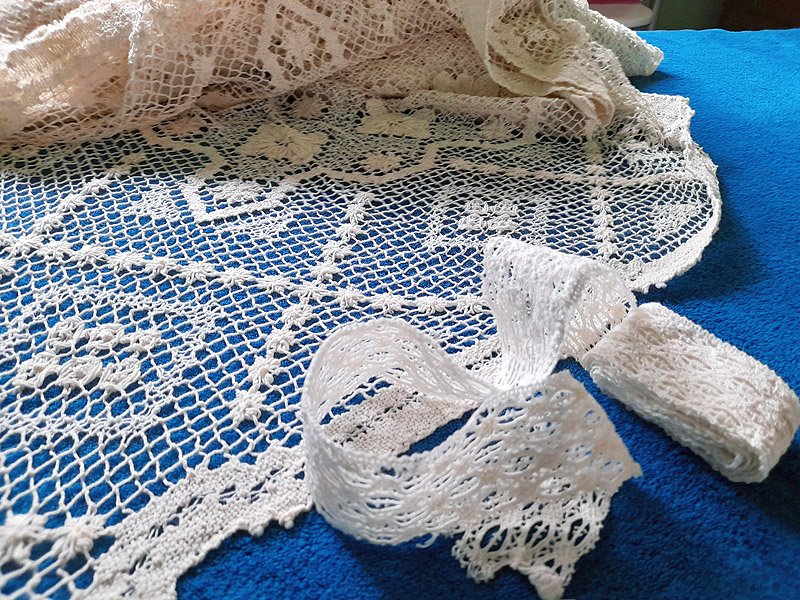 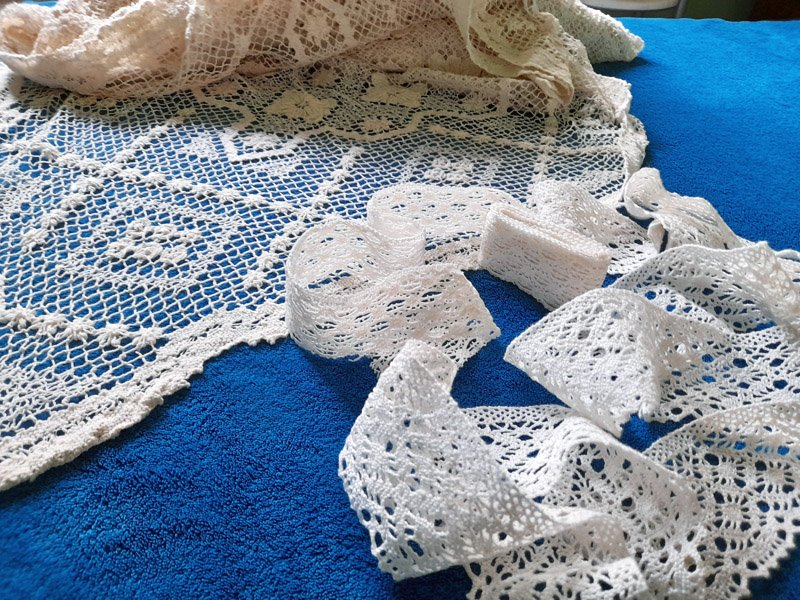 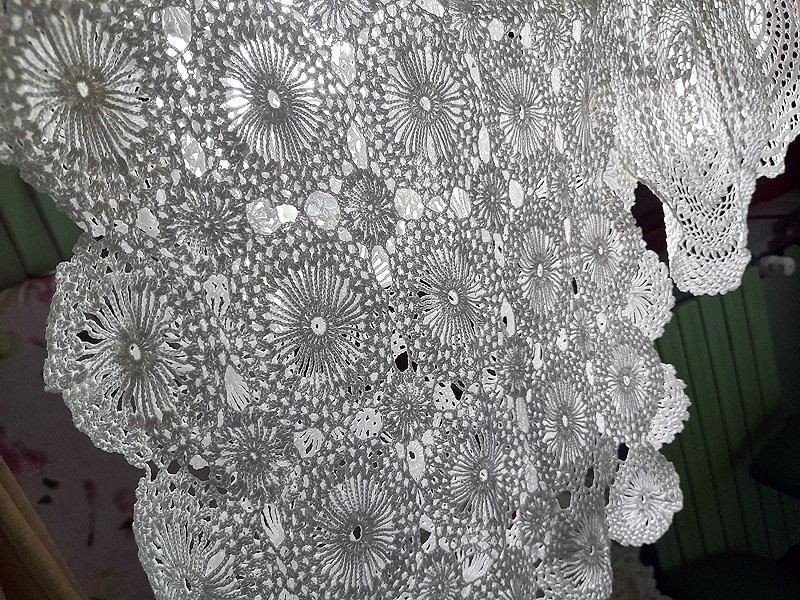 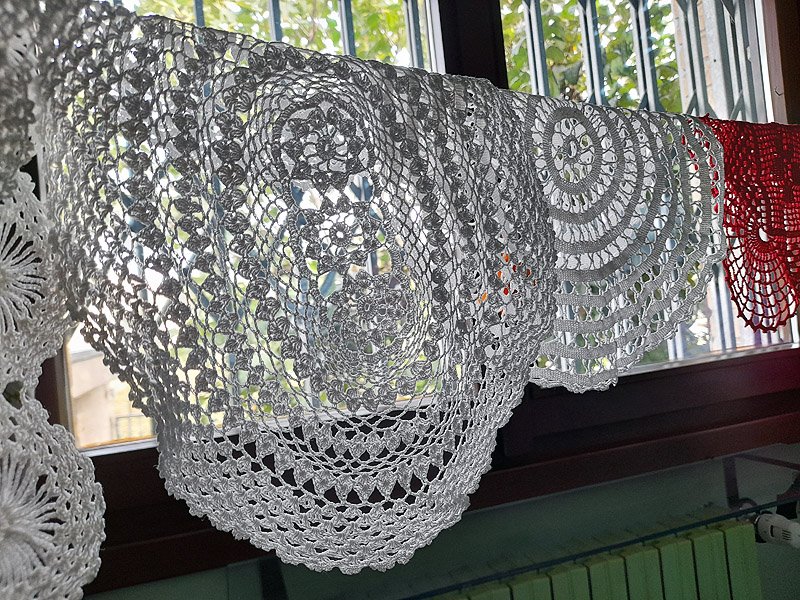 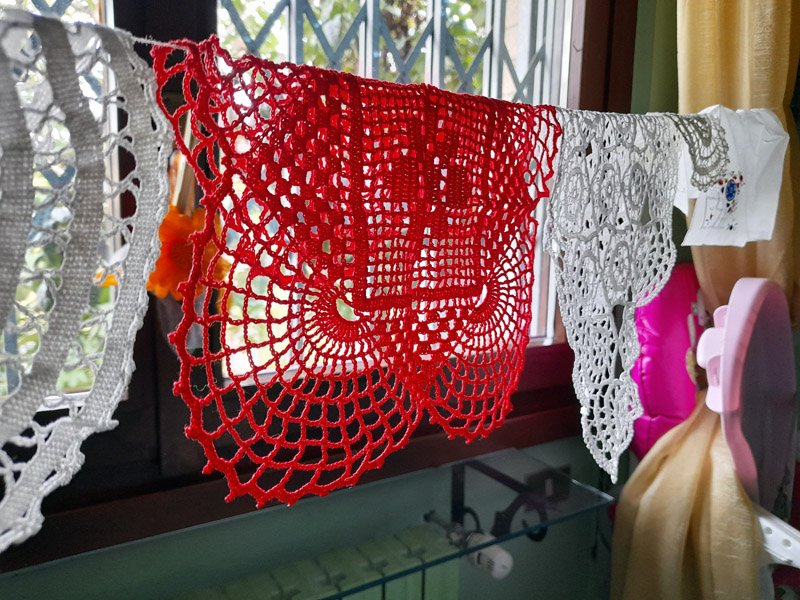 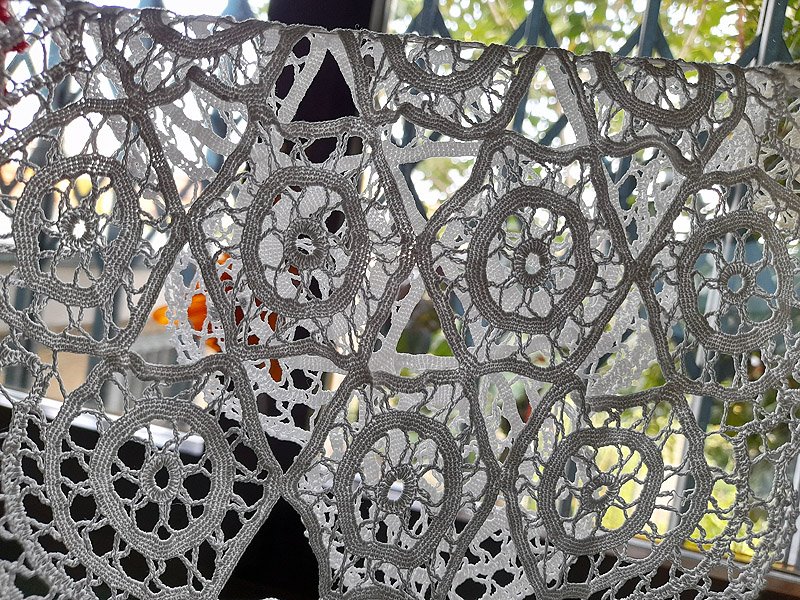 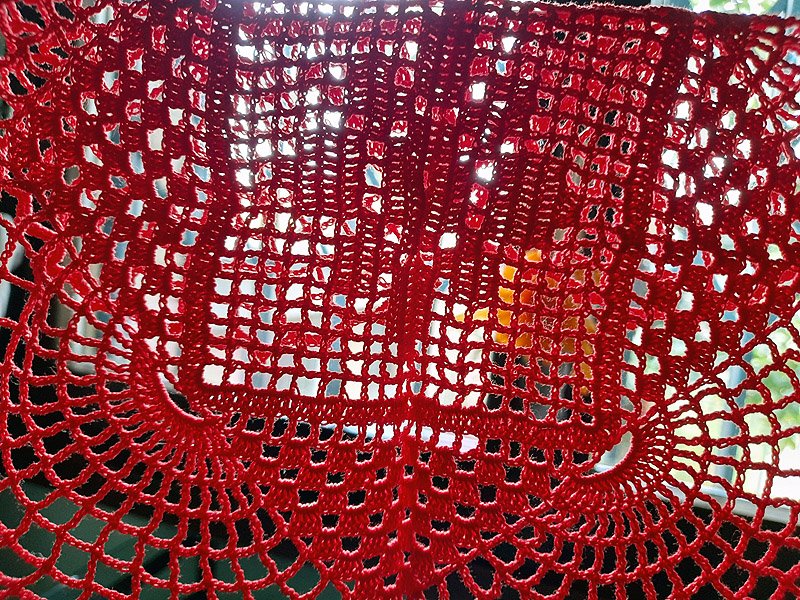 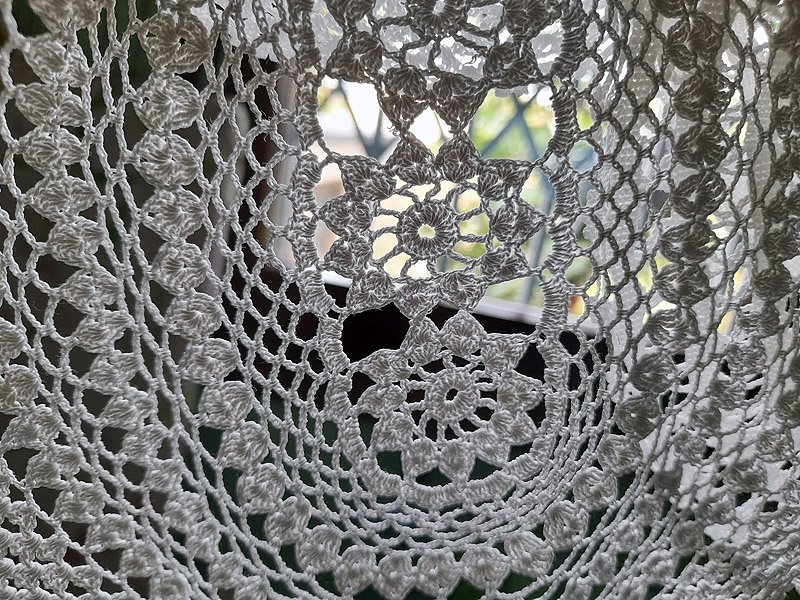 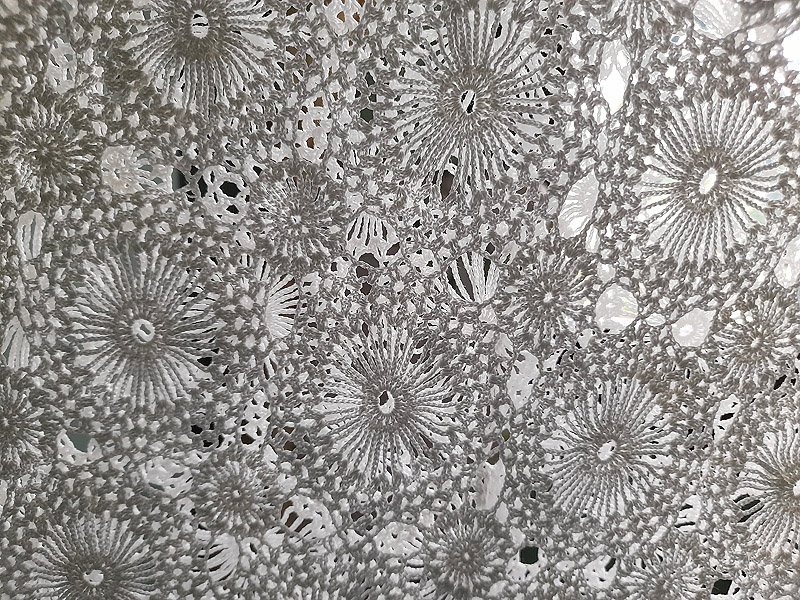 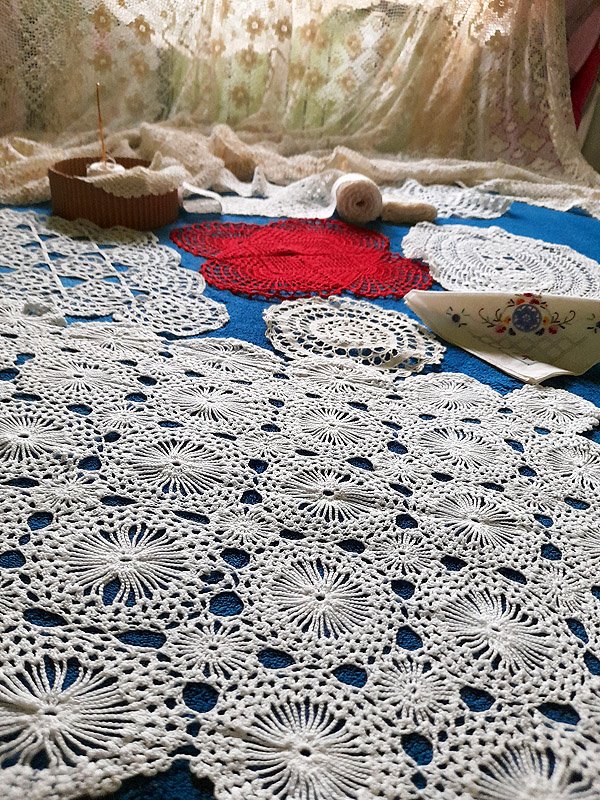 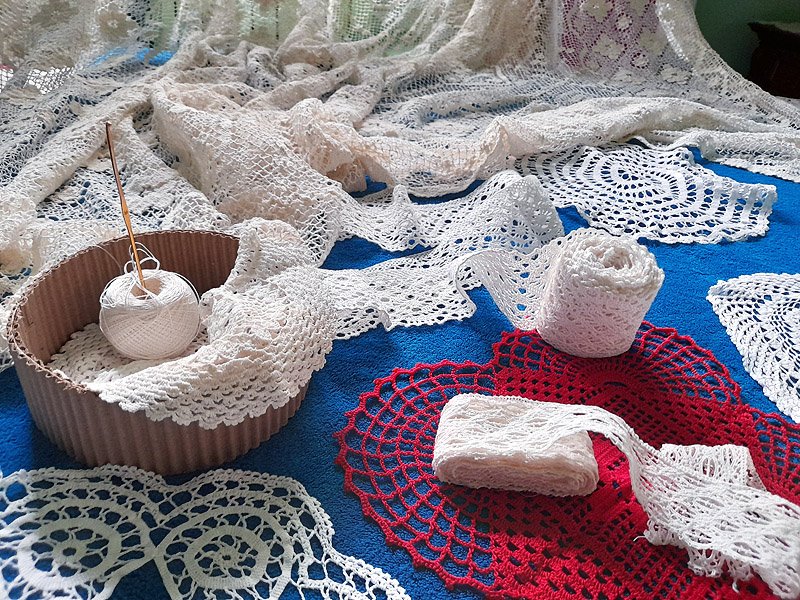 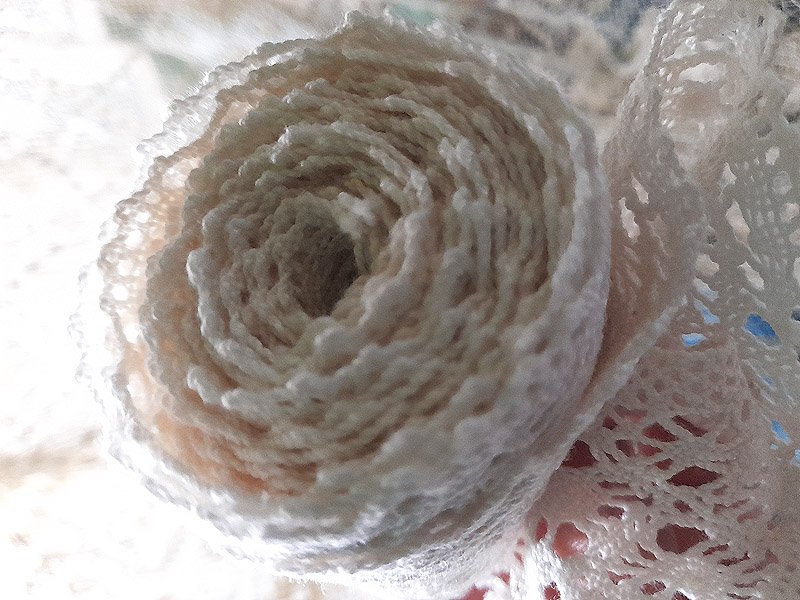 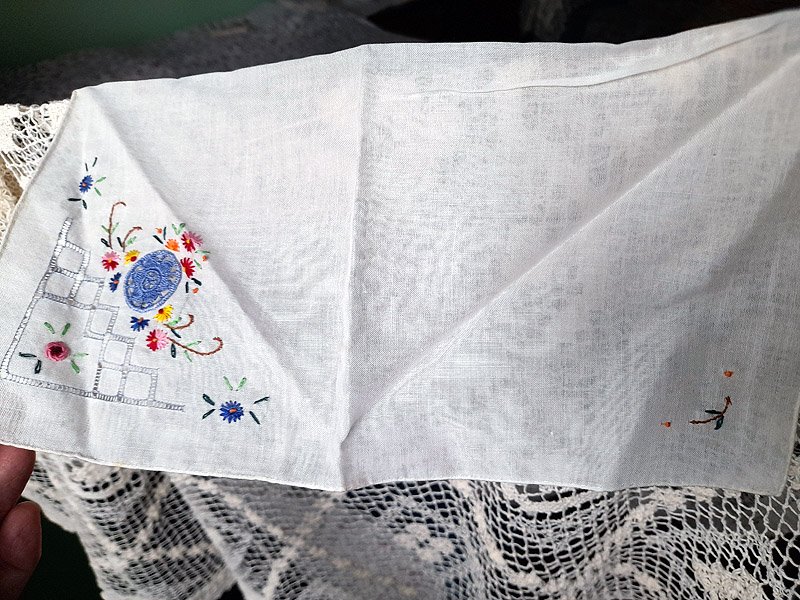 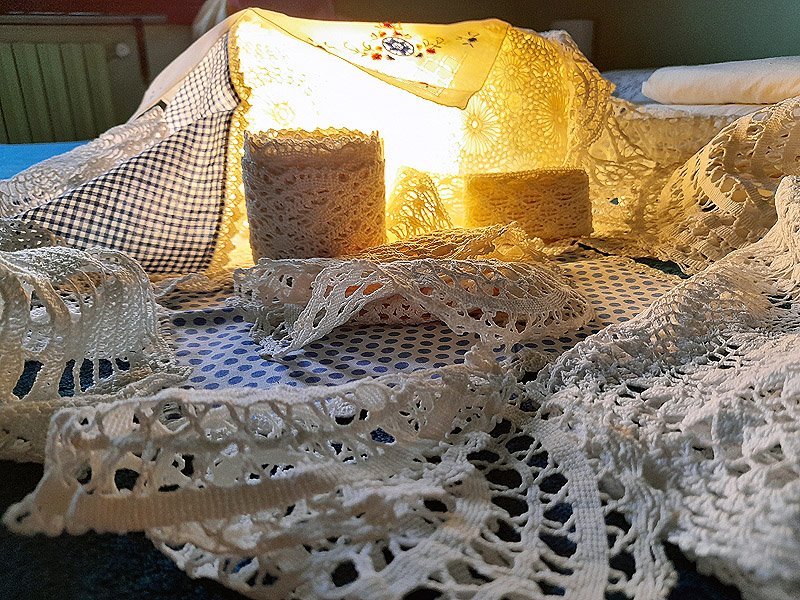 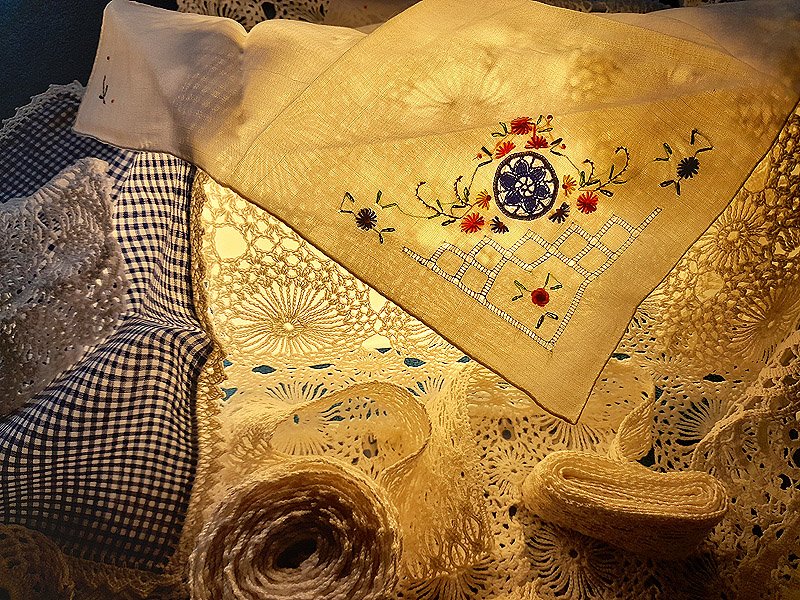 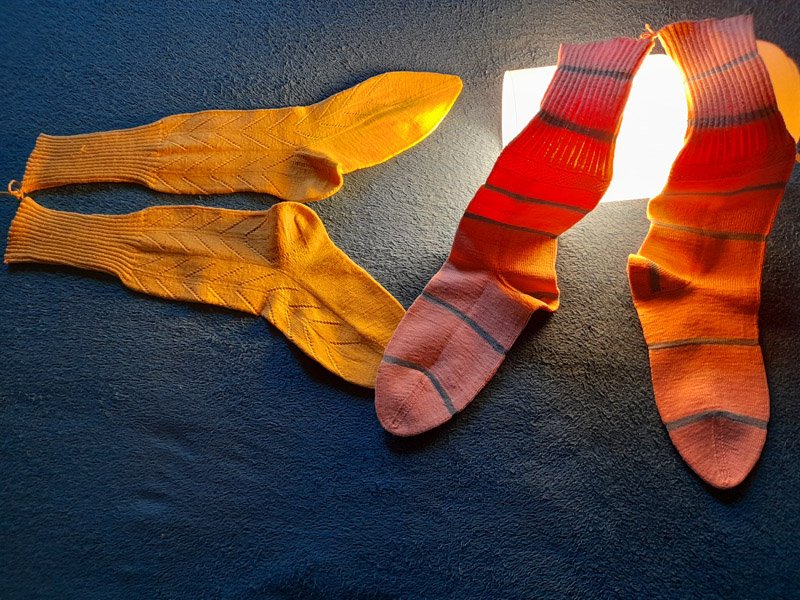 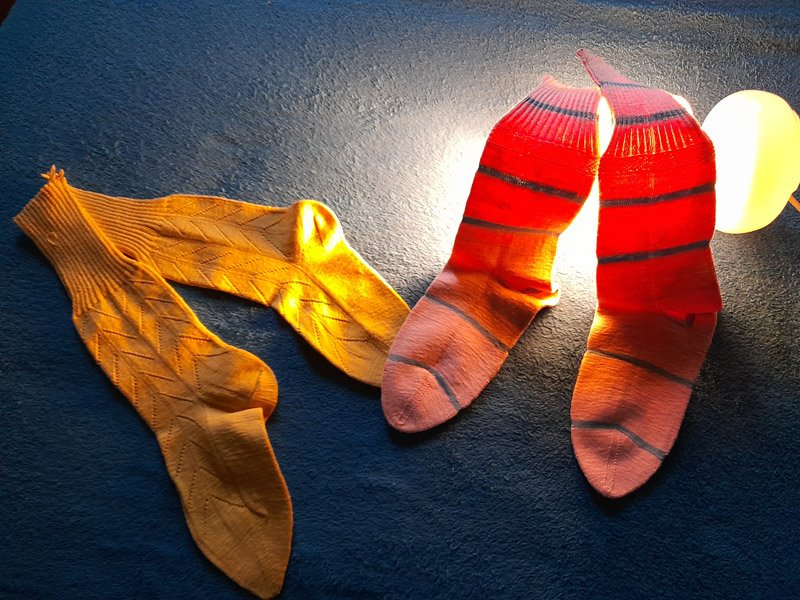 and… last but not least: the refined socks for the groom done by Angela, tied together, with the last thread, to avoid mismatching them and still inhabiting Angela’s legendary trunks…